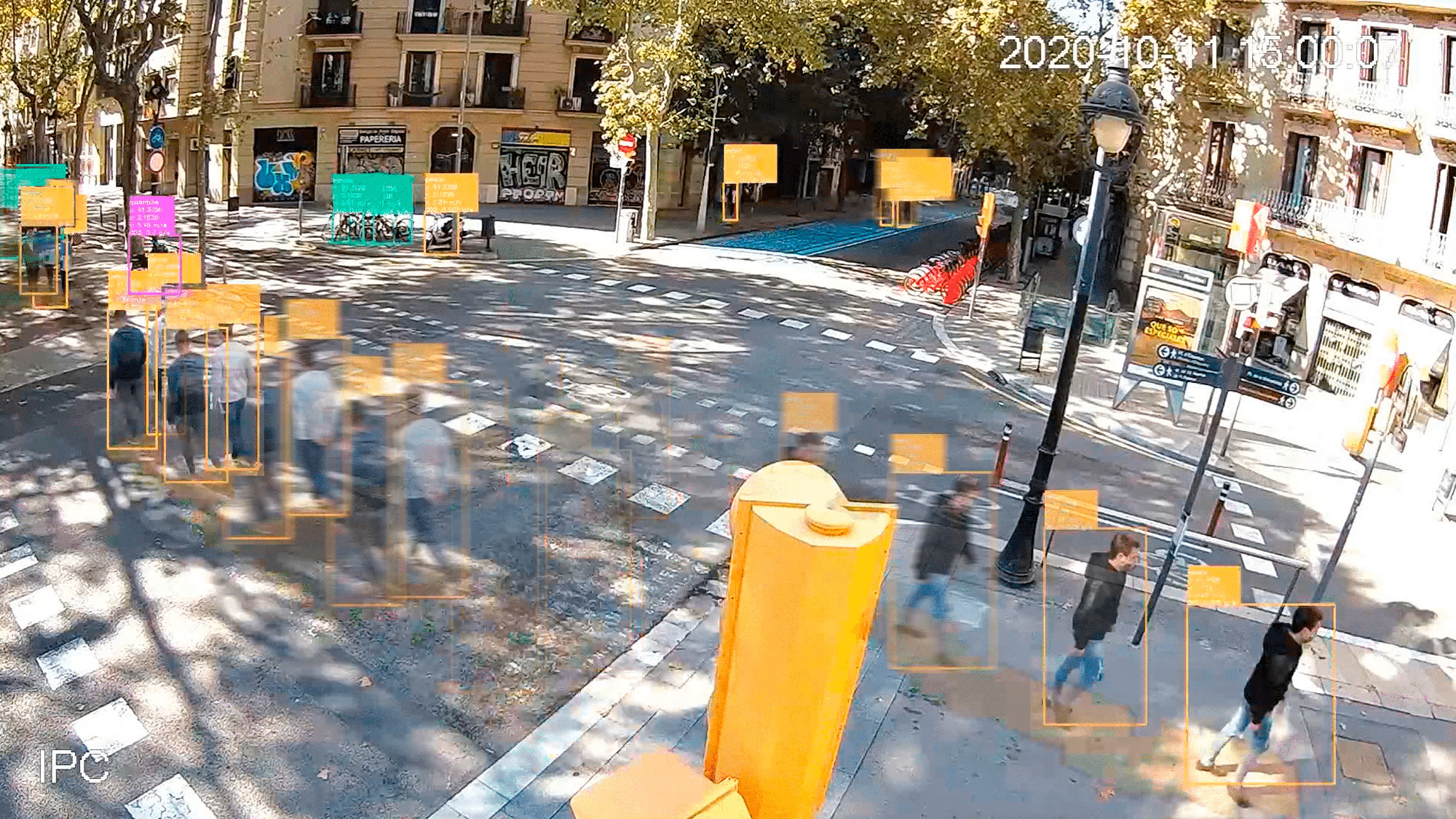 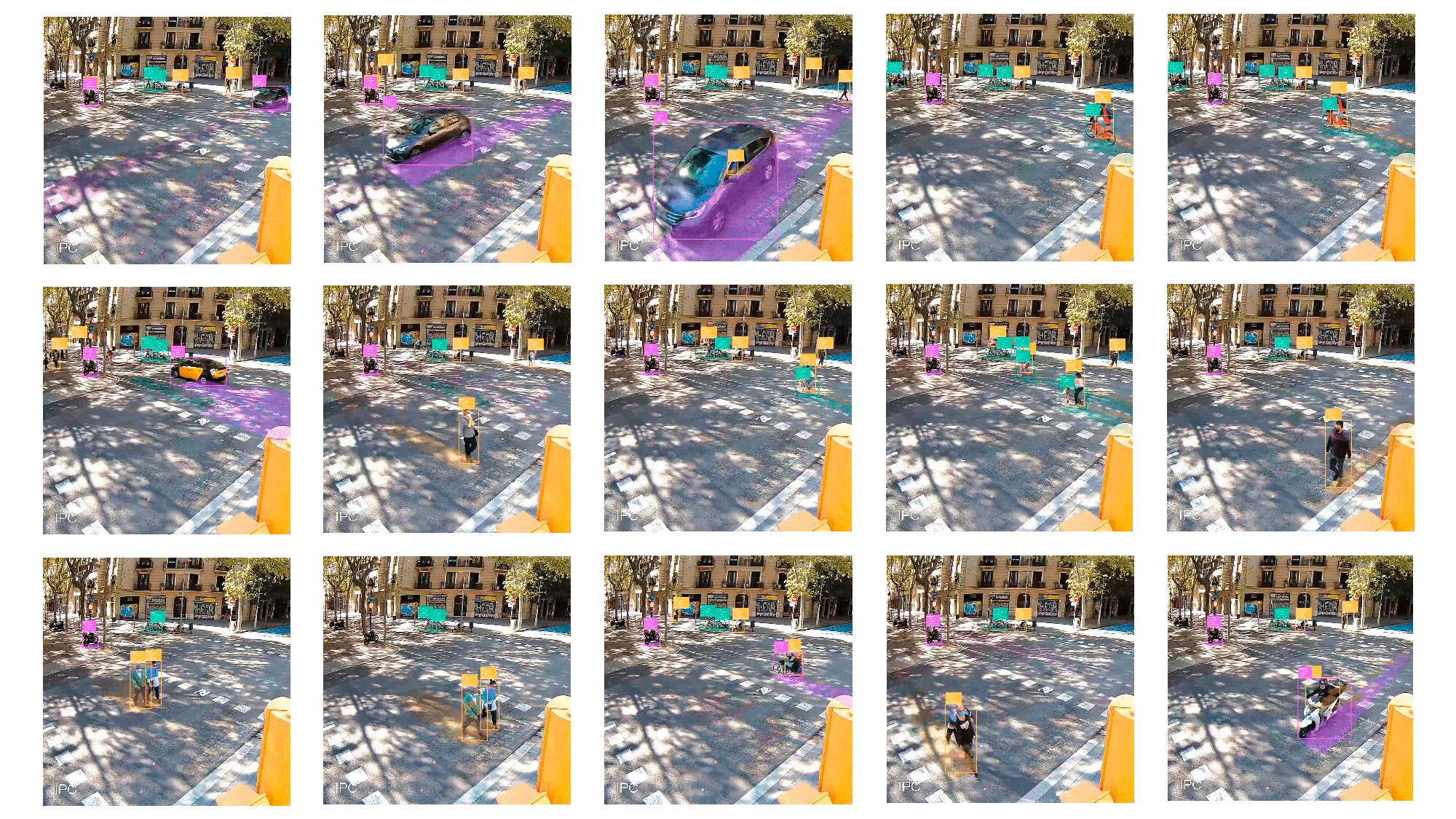 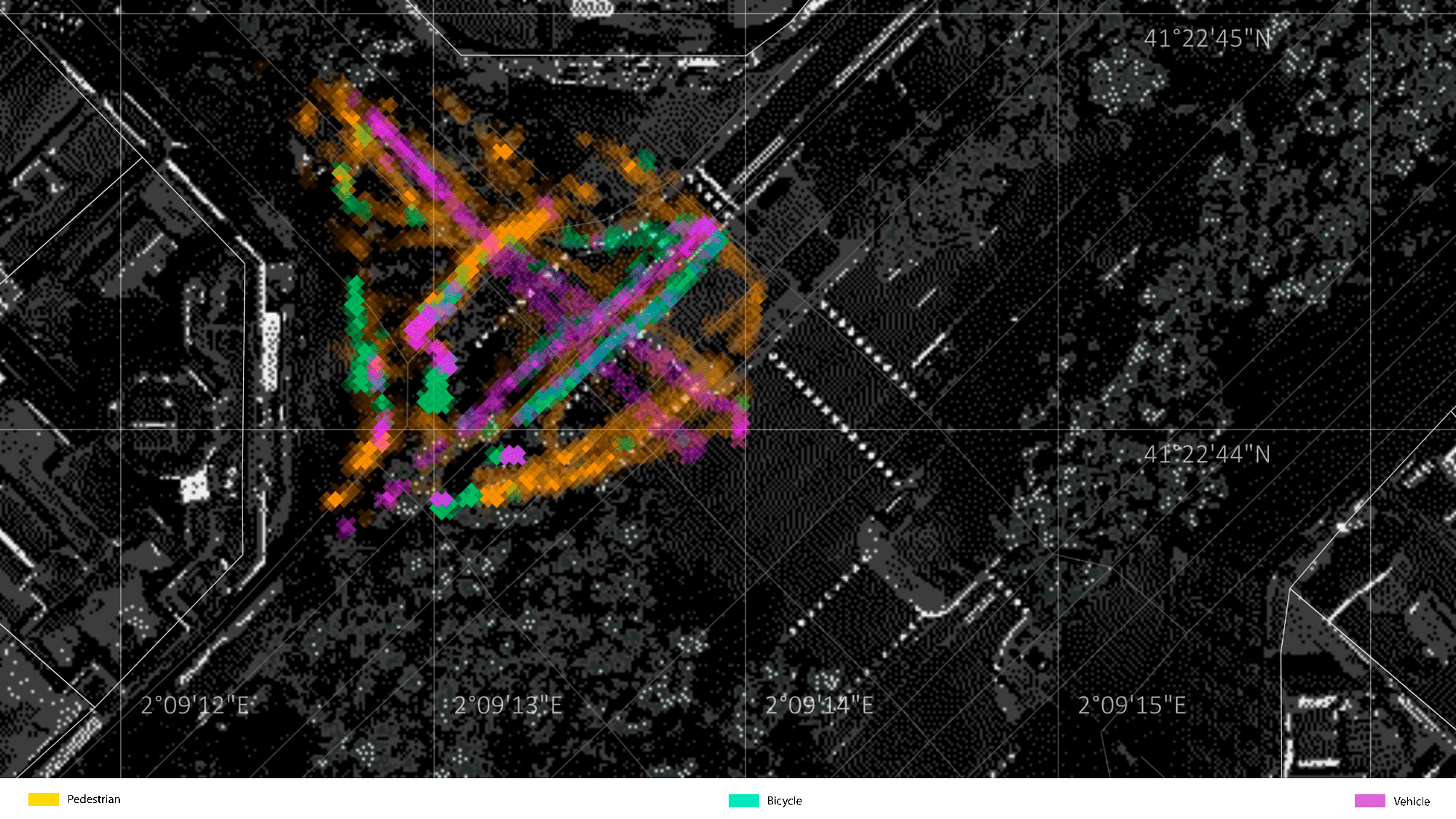 Our goal is to apply such technologies to inform operations of spatial planning distribution, spatial customization, activity planning, pollution monitoring, and comfort levels.
We are defying a novel methodology integrating computer vision and machine learning approaches in the definition of new hybrid infrastructure, based on digital and physical devices, capable of capturing and analyzing data from physical environments.
Such operations will be executed using protocols of image analytics to introduce computer vision and machine learning for the generation of occupancy heatmaps, population classification, spatial segmentation, and interactivity maps.

THE EMERGENCY OF URBAN ECOLOGIES

“There is nothing to learn from global warming, because we do not have the time, or the distance, to contemplate its lessons; we are after all not merely telling the story but living it.”

Rising levels of air contamination are dictating urgent actions by administrators, and urban planners, facing the need to adapt urban organisms to this invisible enemy lingering over our parks, schools, offices, and houses, ultimately, deteriorating the wellbeing of the entire population.
Air pollution has been associated in numerous studies with congenital anomalies, mostly linked to exposure to traffic-related gasses (Schembari et al., 2014).
In this regard, the Air Quality Index (AQI) categorizes the risks associated with air pollutants based on different scales. Warnings begin at 51-100, where levels at 201-300 bring a ‘significant increase in respiratory effects’. Above that, between 301-500 range, it is possible to detect ‘serious aggravation of heart or lung disease, and premature mortality’.
To face this unprecedented threat, cities need to reshape their urban patterns, reprogram mobility, public spaces, and urban infrastructures towards safer, healthier, and ecological solutions.

The plan for the ‘extension’ of the city of Barcelona, proposed by Ildefonso Cerdà, was originally designed to reframe built and natural environments into a hybrid urban pattern balancing lighting, ventilation, public spaces, greenery, and mobility.
Nonetheless, Barcelona is today ranked among the most polluted cities in Europe (Cyrys et al. 2012; Eeftens et al. 2012b). This is partly attributable to its geography; high traffic density (Ajuntament de Barcelona 2007), which is four times higher than London; and a large proportion of diesel-powered vehicles, currently 50% (Reche et al. 2011).
To revert this trend, in 2016, Barcelona introduced a new urban planning model, called the Superblock. It aims to reclaim public space for people, reduce motorized transportation, promote sustainable mobility and active lifestyles, provide urban greening and mitigate the effects of climate change. (Mueller et al., 2020). This planning approach threatens the urban fabric as a programmable surface, regulating the access to cars and vehicles in public streets while enabling the extension of walkable areas and cycling paths.

Concurrently to the development of new urban strategies, novel data-driven instruments have been emerging, providing different approaches to inform spatial planning.
This chapter will highlight several techniques, triggered by computer vision and machine learning algorithms, to analyze image-based data, extract meaningful metrics to inform spatial transformations, and estimate CO2 emissions in an urban environment.
Different methodologies for image analytics will be compared and evaluated to determine the most efficient algorithms for the correct analysis and interpretation of spatial dynamics.
From the applications of those instruments will be generated maps and visual representations of spatial occupancy, clustering and classifying the spatial associations among the different actors operating in the urban environment.
Consequently, pollution levels will be estimated upon detected objects, calculating the carbon footprint for each agent populating the scenes analyzed.

In conclusion, this approach can provide a deeper understanding of urban dynamics, adopting image-based information for clustering and classifying the spatial dynamics produced by multiple actors operating in the urban environment, and finally calculating their environmental footprint. This methodology can enrich emergent approaches of urban planning, such as the Superblock, with a novel set of metrics and criteria based on real-time spatial usage and carbon footprint to guide and orient future urban transformations, ultimately improving the implementation of more resilient, ecological, and sustainable urban models.

“In the statistical age, global warming denial is actually a displaced sort of modernity denial. There is something we don’t want to know very clearly about our modern age. Data is shifty, data isn’t things, and data is all you’ve got.”

Image analytics can render spatial dynamics, by detecting locations and movements of different objects in space.

Existing methods based on image analytics can be distinguished according to two main categories: computer vision and machine learning approaches. Several algorithms have been deployed in computer vision-based processes, such as optical flow, background subtraction, edge detection, etc. (Kam Ho et al, 2012). While these approaches are able to detect motions of different objects, they lack individual discrimination as well as robustness in different lighting conditions, such as weather changes.

This section will focus on a comparative evaluation of recent algorithms for object detection to determine and calibrate the most accurate available solution to describe spatial dynamics, describing mobility and pedestrian behavior in a public space.

“We need to take a careful look at some of the crucial abilities underlying our distinctive human intelligence, such as perception, language, decision-making, commonsense reasoning, and learning. Vision – both looking and seeing – turns out to be one of the hardest of all ‘easy’ things.”

Deep learning technology has been widely used in object detection.

Although deep learning technology greatly improves the accuracy of object detection, we also have the challenge of a high computational time (Lu et al., 2019).

These kinds of algorithms can be categorized according to two main characteristics.

One type is referring to single-stage detectors, such as YOLO (You Only Look Once) and SSD (Single Shot MultiBox Detector), which treat object detection as a simple regression problem by taking an input image and predicting the class probabilities and bounding box coordinates.

A second category refers to two-stage detectors, such as Faster R-CNN or Mask R-CNN, that use an RPN (Region Proposal Network) to generate regions of interest in the first stage and send the region proposals down the pipeline for object classification and bounding-box regression.

In this chapter, we will focus on single-stage detectors since we are prioritizing real-time capability to ensure responsive spatial solutions.

According to studies performed by ISGlobal CREAL over an area of 56 municipalities, including Barcelona, air pollution has been appointed responsible of 3.500 premature deaths per year, 1.800 hospitalizations by cardiovascular reasons, 5.100 cases of chronic bronchitis in adults, 31.100 cases of children bronchitis, and 54.000 asthma attacks among children and adults (Künzli and Pérez 2007).
The impacts of air pollution on health are today the main problem to solve out of all the problems caused by the current model of mobility.
Having developed a robust method for object detection, our system introduces a computational method to define and estimate carbon dioxide emissions provoked by the different actors populating the urban scene.

Figure 5. Comparative analysis of pollution produced by the different actors operating in the urban environment in relation to quantity and spatial occupancy.

The evolution of urban models such as the Superblock is defining a novel approach to city planning, driven by ecological methods targeting healthier, and safer habitats.

In such a context of increasing complexity, it becomes necessary to adopt novel instruments for decision-making.

This chapter serves as an operational ground, promoting machine learning techniques to evaluate the implementation of urban models such as the Superblock, establishing data-driven criteria of activation, based on actual observations performed in public spaces.

In fact, ai-driven techniques can provide a deeper understanding of spatial dynamics, offering extensive insights related to spatial occupancy and carbon emissions. Nonetheless, in a panorama of rapidly evolving technologies, it becomes increasingly necessary to adopt comparable approaches to estimate more performative solutions, introducing methods as the one described.

Furthermore, as technology paves the way for novel applications, it becomes necessary to calibrate such instruments within a legal and administrative framework, to guarantee privacy, ethical coherency, and citizen participation.

As a result, it becomes crucial to evaluate opportunities and implications derived from the application of these instruments, establishing a critical approach to measure novel methodologies and operational strategies.

Even more, parallel to technological improvement, it will be necessary to ensure the coherency of its applications compared to human norms and values. Evaluating and calibrating these models represents today a substantial portion of the research around machine learning. The alignment problem represents the beginning of a new challenge to ensure that machine learning models will capture our norms and values.

The looming threat of a climate crisis imposes elevating our decisions, improving awareness regarding dependencies and implications of the actions we perform to manipulate our habitats.

A new challenge to reshape cities towards responsive and resilient solutions.